skip to main | skip to sidebar

Hi everyone. I hope all is well in Iowa. Kristin, Sean, and their journalist friends are SO busy that I barely have time to write about my various adventures. Kristin is really busy on her computer tonight, but I have time to share one small story.

On Tuesday morning a special bus came to our hotel to pick up the group. After a half-an-hour drive, we arrived at a building that had lots of policemen guarding it. Kristin told me it was the home of Korea's National Intelligence Service or NIS. I asked Kristin if we were going to visit smart people. She smiled and told me that we would get to see some very smart people. But she also told me the NIS is like the CIA (Central Intelligence Agency) in the US. Kristin says the CIA does lots of secret stuff that most people in the United States don't know about.

I'd love to tell you all of the interesting things I saw and learned during our visit but I can't. The meeting was "off-the-record." The guards even took Kristin's camera and cell phone before she could enter the building.

But NIS does have a gift shop and Kristin bought me a few things with the NIS logo so I can remember my visit. Thanks Kristin! 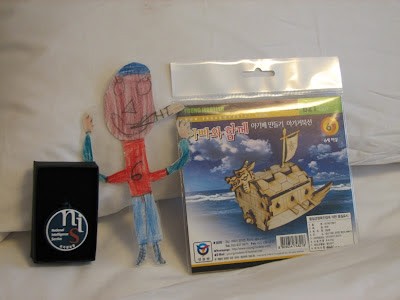 Doesn't is seem strange that I can't tell you about my visit to NIS, but Kristin can buy items with the NIS logo? Oh well, at least I can say I was there!